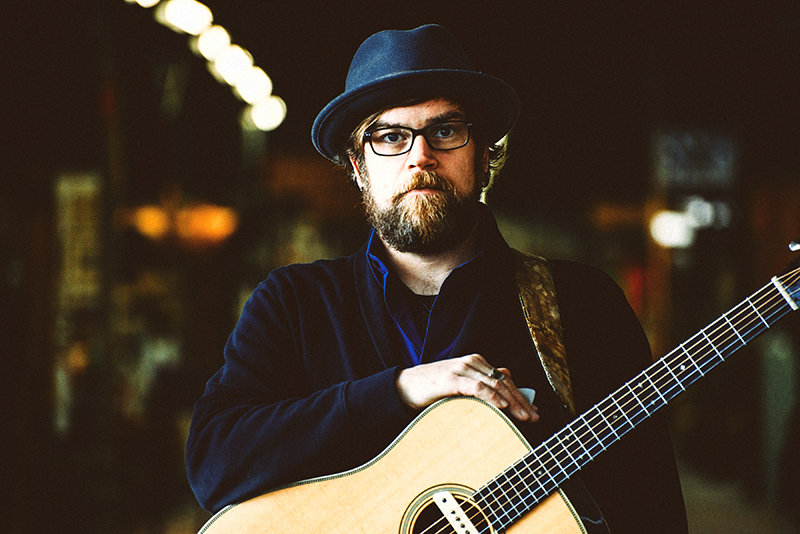 Answer:  This is a question that is asked constantly, and the
answer really has to do with who is asking it and what these genre/labels mean
to them. I find that even from one side of the U.S. to the other these
descriptions have varied meanings, so it’s difficult to pin down a
one-size-fits-all answer. My best answer is that I’m an Americana songwriter
playing original music. The content and presentation can lean towards
folk-rock, but my own personal acoustic guitar playing style can lean into the
bluegrass realm a bit. I also like the idea of the “folk singer,” in that it
implies a regular person making observations and statements about what’s going
on around them. I think that tradition led to the “singer-songwriter” genre
that is as much about observations of an artist’s inner landscape as the outer
world. That’s a long way of saying I’m an Americana folksinger from the North
Carolina mountains.

Answer:   I write them all myself. I’ve got a list of
close to 500 song ideas in various stages of completion that I go back to and
see what’s bubbling up to the top. When it’s time to record, I usually bounce
some of them off my band or producer and see what strikes a chord with either
them or me and focus on getting those few polished up enough to record and
release.

Answer:  I like a song that’s a little bit about me, and a
little bit about the world around me, and with something in it that everyone
can relate to at one point or another. Sometimes they’re totally fabricated
stories but I still strive to have something emotional that I can get behind
fully because it’s something I’ve experienced somehow. And I find if I’m honest
about my experience, that tends to resonate with folks who have had a similar
one.

Answer:  After having released seven albums, there are too
many to pick a true favorite. I am generally focused on the ones I am working
on currently, as the recorded ones were songs I was working on a year ago and
the idea of them probably came from something three years ago. These songs
gestate and roll around for a long time. If I had to pick right now, I am still
partial to “Looking for Light” off of the Refuge CD. It’s nothing special, but
I like the hopeless/hopeful sentiment and some of the wordplay and the flat-picking
rhythms. We play it differently live now, but I especially like how Jackson
Dulaney brings the open tuned second guitar to the recorded track. Feels good.

Answer:  It’s always great to touch someone deeply with my
songs. It’s common to have someone come up after a show who’s had an emotional
experience based on something I’ve written and played, and it’s always some
aspect of a song I wouldn’t have expected. That’s why I always say that you
cannot anticipate what is going to resonate with the audience, and the only way
to cater to that connection is to write and perform honestly, from the heart. I
think that’s what people are drawn to and when the power of music as a
communicator is at its best.

Lamitschka:  Who or what inspires you musically and how deep
do your musical roots run?

Answer:  Just about anything can inspire me. Lately it’s when
I hear other artists I really like. For a second I get jealous, and then I flip
that around to “well, I’d better go write something or practice…”. I do gather
song ideas all the time though as I go through my day. It’s everywhere if you
look for it. Whatever that Spirit is that inspires and provides is right there
all the time if I just pay attention.

Answer:  Probably my dad’s record collection and his
relationship to music. It was a powerful thing in our home out in the woods of
western North Carolina when I was a kid. He had all the popular rock and folk
and adjacent styles of music on vinyl from about the mid 60’s to the mid 80’s,
and then started to transition to CDs. At some point I started playing guitar,
and I’d been singing since I was young. And then eventually I figured out that
I could create my own music. 30 years later….I’m doing it professionally.

Answer:  I wanted to become a songwriter because of the
experiences I had hearing other songwriters I admire. There’s a line in my song
“Three or Four minutes” that says “no book, or teacher, or lover, ever touched
me as deeply as a tune that was three minutes long,” and there’s a lot of truth
in that. I’m not a very expressive person in my day-to-day life, but I am able
to emote and get all that out onstage when I perform.

Answer:  I just want to do better. I want to write and play
better, to connect more, to grow as an artist. That’s really about it. I want
to make my art better, make myself better, and maybe through that I can help
other people around me and even the world at large in some small way.

Answer:  If you listen closely to singer-songwriters and
their content, we’re all different. It’s a little bit like hearing an
instrumentalist and being able to tell who it is just from the inflections and
playing style. The cool thing about songwriters is that they each have their
own tone and voice, and I don’t mean that in an auditory sense. The
differentiation is in the work. The personality comes through. It’s more
apparent at live performances, but it’s usually there in the recorded work as
well.