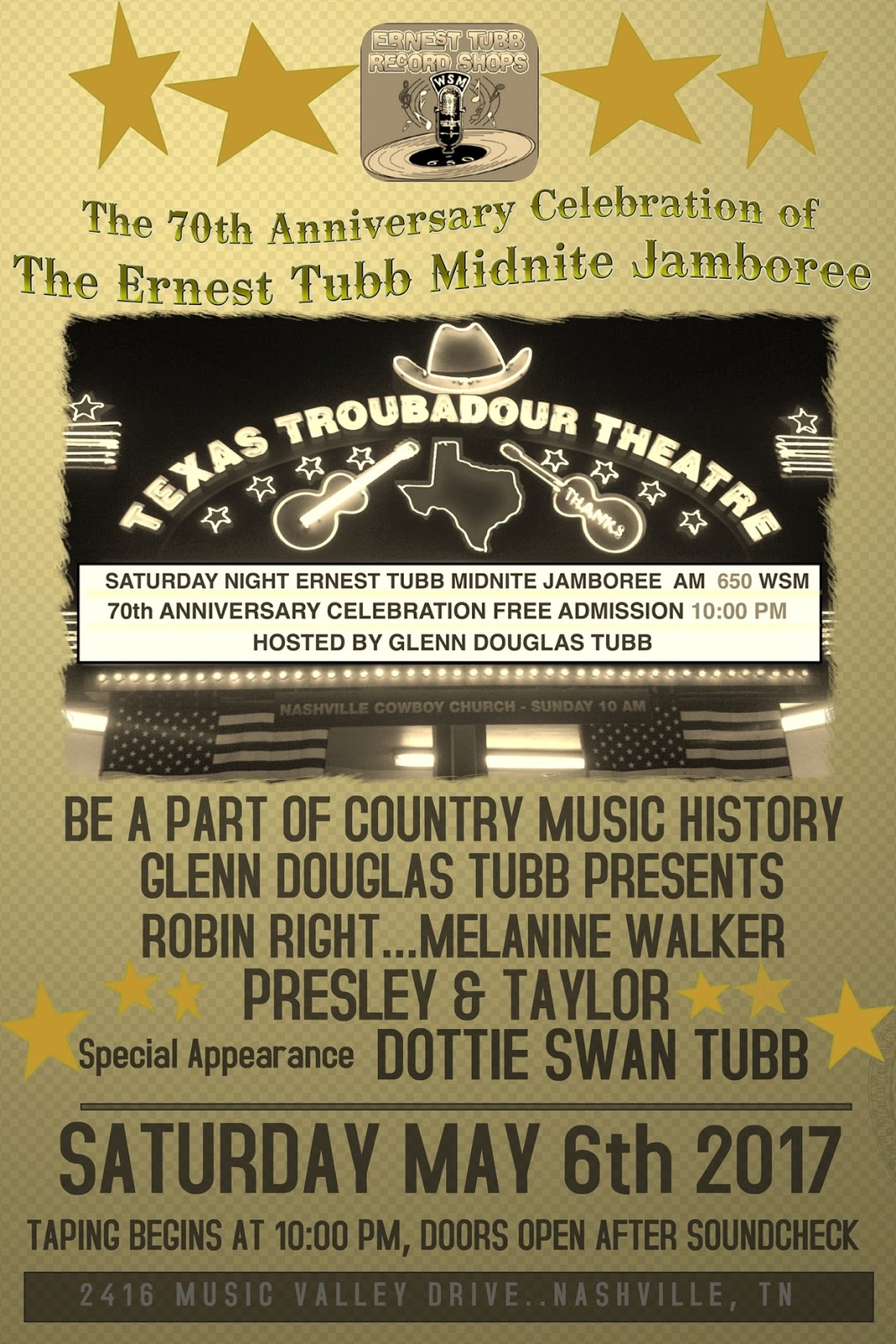 ERNEST TUBB RECORD SHOP
CELEBRATES THE 70TH ANNIVERSARY
OF THE ERNEST TUBB MIDNIGHT JAMBOREE
Ernest Tubb Midnite Jamboree 70th Anniversary Celebration
Slated For Saturday, May 6, 2017
Hosted By Glenn Douglas Tubb • With Special Performances Melanie Walker & Robin Right
Dottie Swan Tubb And Dynamic New Sister Duo, Presley & Taylor, To Appear
NASHVILLE, Tenn. (April 18, 2017) — Music City will spotlight yet another musical milestone in the coming weeks; the Ernest Tubb Records Shop will celebrate the 70th anniversary of The Ernest Tubb Midnite Jamboree.
A
special celebration and musical event paying tribute to Ernest Tubb and
his Midnight Jamboree, and his contribution to the heritage and
livelihood of country music, will be held Saturday evening, May 06, 2017 at the Texas Troubadour Theatre (2416 Music Valley Drive, Nashville, TN). The Ernest Tubb Midnite Jamboree 70th Anniversary Celebration will be held in the same original format as the very first show.  Host Glenn Douglas Tubb
will kick-off the festivities, a Jimmie Rodgers’ track (Ernest Tubb’s
idol) will be highlighted followed by live performances from legendary
recording artists including Melanie Walker and Robin Right, with a special guest appearance by Dottie Swan Tubb.
In keeping with the show’s tradition, and Ernest Tubb’s passion to
support new talent, attendees will also enjoy a memorable, first-time,
performance by country music’s hottest, new sister duo Presley & Taylor.  The May 6 date marks the exact date that Ernest Tubb opened the doors to the Midnite Jamboree in 1947.
Country
singer/songwriter and recording artist, and owner of the Ernest Tubb
Records Shop, Ernest Tubb founded the Midnite Jamboree to demonstrate
and share his appreciation to the fans who supported him throughout his
career. Fashioned in the footprint of the Grand Ole Opry, the Ernest
Tubb Midnite Jamboree highlighted up-close and personal, intimate artist
experiences at the Ernest Tubb Records Shop; the show was, and
continues to be, recorded before a live audience for radio broadcast.
[Airing on WSM-AM, the Ernest Tubb Midnight Jamboree is the second
longest-running country radio show, next to the Grand Ole Opry.]
“This
celebration pays tribute to Ernest Tubb and his vision, and to all of
the young country music trendsetters who cut their teeth on the Midnight
Jamboree stage,” said Anniversary Show Host Glenn Douglas Tubb.
“My uncle [Ernest] has plenty to be proud of; folks like Hank Williams,
Loretta Lynn, Patsy Cline, Mel Tillis, Randy Travis (known as Randy
Traywick at that time), Garth Brooks and the King of Rock, Elvis, all
played on his stage early in their young careers.  …and 70 years later
the tradition lives on to support and recognize our friends and family
in country music.”
“As
newcomers to the format, we are so very pleased and honored in the
extended invitation to be part of this monumental event—the 70th
Anniversary of the Midnight Jamboree,” said Presley & Taylor (who
have enjoyed consecutive Top 20, 30, 40 single status on the country
charts since making introductions in the country music scene in 2014). “The
artists who have taken this stage before us, all of them, are our
inspiration; and this night will be marked as ‘unforgettable’ for us.”
The
Ernest Tubb Midnite Jamboree fan experience is unlike any other;
artists host fan meet and greets after his/her shows, sell their records
(CDs) and spend personal, genuine time with the fans.  The Ernest Tubb Midnite Jamboree 70th Anniversary Celebration will be no exception as a must-see, must-attend event for country music enthusiasts alike.
Ernest Tubb Midnite Jamboree 70th Anniversary Celebration
Saturday, May 06, 2017  • Doors Open at 10PM
Texas Troubadour Theatre (2416 Music Valley Drive, Nashville, TN)
Free Admission • Taped for Radio Broadcast before a LIVE audience
CLICK TO LISTEN TO MIDNIGHT JAMBOREE ARCHIVED SHOWS http://etrecordshop.com/mjarchives.htm