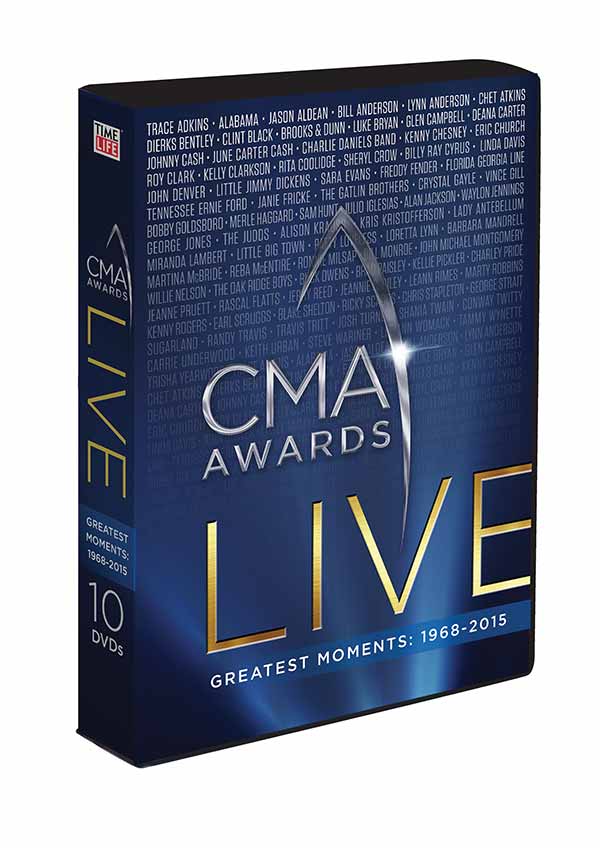 AVAILABLE FOR THE FIRST TIME EVER

NASHVILLE, Tenn. –
Time Life in conjunction with the Country Music Association is proud to
announce the upcoming release of CMA Awards Live: Greatest Moments
1968-2015, an extensive 10-DVD set of many of Country’s musical moments
that have made history over the years. Time Life will begin taking
pre-orders Wednesday, Oct. 11, with a 30-minute infomercial promoting
the package airing throughout the fourth quarter of 2017. CMA Awards
Live will be officially released to retail early next year.

Since 1968, millions of Country Music fans tune in each year to the
CMA Awards to see which of their favorites walk away with the most
coveted awards in the industry. In addition to the presentation of the
yearly accolades to the biggest stars in the Country format, the yearly
telecast is famous for historic performances and collaborations – many
of which are the first time legendary songs were featured on television.
Outside of their original airings, these performances have never been
commercially available.

The set includes 127 performances from five decades of the
nationally-televised ceremony, with performances from many of the
premiere artists in the genre – Glen Campbell, Johnny Cash and June
Carter Cash, Barbara Mandrell, Buck Owens and Kenny Rogers – all of
which helped define the sound that brought popular appeal to Country
Music.

CMA Awards Live: Greatest Moments 1968-2015 features unforgettable
moments from the artists who have nurtured the sound over the past
decade and taken the music to new heights, like Miranda Lambert, Brad
Paisley, Taylor Swift, Carrie Underwood, and Keith Urban.

Besides the performances, the set also includes bonus features and
interviews with artists that have performed – and won – on the telecast
over the years, including Naomi Judd and Charley Pride, as well as the
last interview with the longest-serving CMA Executive Director, Jo
Walker Meador, and CMA’s current Chief Executive Officer Sarah Trahern.
Other moments include:

• Merle Haggard’s performance of the iconic “Okie From Muskogee,” the
Single of the Year from 1970 – the same night that he was named CMA
Entertainer of the Year.

• Dolly Parton and Kenny Roger’s riveting performance of “Islands In
The Stream,” which opened up the 1983 telecast – the same year that the
song topped the Country and Pop charts throughout the world.

• Alan Jackson’s 2001 world premiere performance of “Where Were You
(When The World Stopped Turning)” which captivated America following the
tragic 9/11 attacks.

• CMA Entertainer of the Year winners Brooks and Dunn (1996) and Reba
McEntire (1986) performing a passionate version of “Cowgirls Don’t Cry”
in 2008.

• Alan Jackson and George Strait’s tender tribute to George Jones
following his passing in 2013 with a soaring version of “He Stopped
Loving Her Today,” a CMA Single and Song of the Year winner from 1980.

And, speaking of collaborations, there are plenty in the collection,
like once-in-a-lifetime pairings of artists Loretta Lynn, Dolly Parton
and Tammy Wynette, from 1993 performing “Silver Threads and Golden
Needles,” and an incredible performance from Miranda Lambert, Loretta
Lynn, and Sheryl Crow of Lynn’s signature “Coal Miners’ Daughter” from
2010.

CMA Awards Live: Greatest Moments 1968-2015 also features many
performances from some of music’s biggest stars from outside of the
format, including Jimmy Buffett, Rita Coolidge and Lionel Richie. Also
included with the collection is a 44-page collectible booklet featuring
Award winners and the history of the CMA Awards shows.

Time Life is one of the world’s pre-eminent creators and direct
marketers of unique music and video/DVD products, specializing in
distinctive multi-media collections that evoke memories of yesterday,
capture the spirit of today, and can be enjoyed for a lifetime. TIME
LIFE and the TIME LIFE logo are registered trademarks of Time Warner
Inc. and affiliated companies used under license by Direct Holdings
Americas Inc., which is not affiliated with Time Warner Inc. or Time
Inc.

About the CMA Awards

The first “CMA Awards Banquet and Show” was held in 1967. The
following year, the CMA Awards was broadcast on television for the first
time – making it the longest running, annual music awards program on
network TV. The CMA Awards have aired on ABC since 2006. ABC will be the
network home of the CMA Awards and CMA’s other two television
properties, “CMA Fest” and “CMA Country Christmas,” through 2021.